Book #2 in The Secret Lives of Will Tucker Series

From bestselling author Kathleen Y’Barbo comes Millie’s Treasure, the second book in The Secret Lives of Will Tucker series, a new set of novels involving romance, adventure, and hidden identity.

Memphis 1890 – Bookish heiress Millie Jean Cope is as clever as she is beautiful. Unfortunately, though adept at solving puzzles and cryptograms, she doesn’t realize her new fiancé isn’t who he claims to be, but instead is a charming scoundrel. The infamous Will Tucker is presenting himself as a British gentleman, Sir William Trueck, though in reality he is a crafty criminal looking for a hidden map to a secret treasure.

Pinkerton agent Kyle Russell has been on Tucker’s trail for years. At last Kyle believes he has Tucker cornered, but he is uncertain whether the lovely woman on the con man’s arm is an unsuspecting victim or willing accomplice. Finding reasons to spend time with Millie is easy. Keeping himself from falling in love with her is another issue entirely. 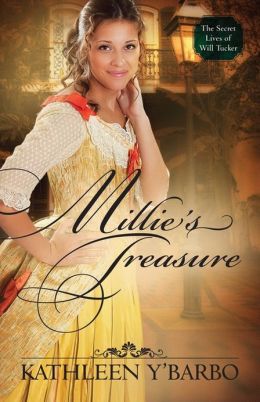 More in THE SECRET LIVES OF WILL TUCKER series